The reactions of trifluoroacetic acid are centered on its carboxyl group. The trifluromethyl group is of the most stable structures known, being inert towards practically all oxidizing, reducing, and hydrolyzing conditions. Although a strong organic acid, trifluoroacetic acid is considerably weaker than strong inorganic acids. The use of trifluoroacetic acid as an olefin hydration promoter permits the synthesis of alcohols from olefins which are polymerized, oxidized, or otherwise decomposed by sulfuric acid. A wide range of reactions are promoted by trifluroacetic acid including esterifications, condensations, and oxidations. Its advantages over the usual acid catalysts are smoother reaction and less decomposition. TFA also offers easy handling and recovery in these applications. 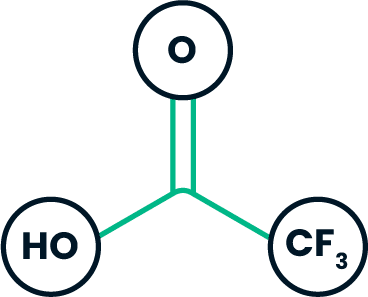 Trifluoroacetic acid is a very strong acid and is extensively used in organic chemistry. It provides a convenient way to introduce a trifluoromethyl group into a more complex organic molecule. These compounds are used in the production of pharmaceutical and agricultural chemicals.

It is used as an intermediate in the synthesis of pharmaceutical and agricultural chemicals. It is used in peptide synthesis and as a solvent and catalyst in polymerization and condensation reactions.

When using TFA, water is the coproduct, which works well in aqueous systems or systems tolerant of water.

The usual carboxylic acid derivatives such as esters and amides can be made readily. They differ from the corresponding acetic acid derivatives in that the esters hydrolyze more readily and the amides of primary and secondary amines are sufficiently acidic to dissolve in 5% aqueous alkali.

TFA adds to olefins and acetylenes. The saturated ester from the olefin addition can be hydrolyzed readily to the corresponding alcohol. In fact, TFA can be used to promote hydration of olefins which are too sensitive to be hydrated in the usual sulfuric acid procedure.

TFA is used as an esterification and transesterification promoter. In the presence of another carboxylic acid, that acid will be preferentially esterified. The mixed anhydride can be made from the other acid anhydride and TFA.

TFA can be used to promote the acylation of aromatic and unsaturated compounds to form the corresponding ketones and a variety of acyl-containing compounds. TFA can be used to protect active amino groups temporarily. Esters of amino acids protected this way have sufficient volatility to be distilled or analyzed by GLC. Removal of the TFA is easily accomplished without changing chirality or other active groups in the molecule.

In some automated peptide reactions, TFA is added to deprotect amino groups sequentially as the molecule is being built. For this use, the solvent characteristics, acidity and volatility of TFA play a role. Our highly purified, lowresidue BioGrade™ TFA helps assure purity in the final protein.

Making trifluoroacyl derivatives permits the use of 19F NMR. Analysis of the chemical shifts can aid in determining the structure of the original molecule. TFA can be mixed with other acids, or Lewis acids, to generate modified catalysts useful in olefin/alkane reactions in petroleum refining steps. These catalysts reduce byproduct sludges and increase yields when compared to the more conventional catalysts.

Peroxytrifluoroactetic acid is readily made from TFA and hydrogen peroxide. The peroxy acid is an oxidizer of amines, olefins, ketones, oximes and aromatics. The combination of the peroxy acid and boron trifluoride is an excellent source of positive hydroxyl groups for the hydroxylation of aromatic compounds.

The peroxy acid will dissolve metals not normally dissolved by mineral acids (Ag, Bi, Cu, Hg, In, Pb, Tl, etc.). This is useful for analytical purposes. Another analytical use for TFA is as the solvent during oxidations of metal ions by chromic acid, permanganate and chlorine. TFA is both inert and a good solvent in these cases.

TFA is miscible with most organic solvents and it will dissolve limited quantities of lower alkanes. Fluorinated solvents, even perfluorocarbons, are completely miscible with TFA. Polyamides and polyesters are soluble and the solutions can be used for analytical purposes or to perform reactions on the polymers. The solutions may also be used to apply coatings of the polymer or to spin fibers at low temperatures.

TFA will cause severe burns to the skin, eyes, mucous membranes and other exposed tissues because of its strong acidity and fast tissue penetration. Special precautions and protective clothing, including rubber gloves and face masks, should be worn when handling it. The best treatment for spills on the skin is immediate and continuous flooding with water on the affected area.

TFA does not exhibit poisoning due to fluoride ion or any toxicity resembling that of monofluoroacetic acid.

For additional safety information refer to our MSDs. The information given above is intended for general reference only.